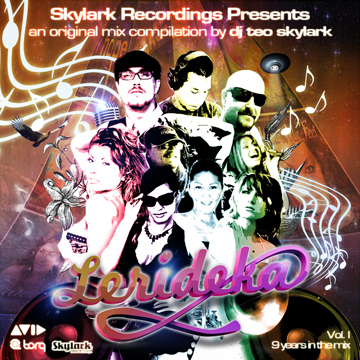 Dj Teo Skylark & Skylark Recordings, llc. Present “Leri Deka” volume one, nine years in the making. The compilation is a forty-five minute Mega Mix Compilation of Skylark Recordings original music titles. The mix features eleven original compositions produced by Teo Skylark, six of these mixes are unreleased tracks, three of the titles have never before been heard outside of the artists that created the material until now.

The track listing is as follows:

Leri Deka is a Greek word that translates to sacred ten. The name symbolizes the amount of musicians and artists that have collaborated upon the different music titles published and released upon Skylark Recordings. This is also symbolic of the years that Skylark has been in operation.

Skylark Recordings is a music publishing intellectual property catalog project started over twenty years ago by its founder Dj Teo Skylark. The company officially formed in 2002 and has released over 29 original compositions to date available internationally. The coming new year will be the tenth anniversary of the organization.

The choice for the name is further symbolic and rooted in Sacred Geometry, Cymatics and the Ten Sacred Rays. While these concepts may be off the deep end for most, the ideology they represent is the fundamental role that music plays in humanities existence. Sound healers, spiritual masters, and mystics have used music and sound vibration for millenniums in healing practice and ceremonies. From tribal celebrations and rituals to cathedral choirs, music has been used to heal the human spirit.

As you will find, each of the titles in the compilation spans four different languages; English, Spanish, French and Japanese. Some of the titles do not lend themselves to a language at all; rather the human voice is used as an instrument through non-linguistic harmonies. The purpose of the titles that are produced in this way is to transcend the boundaries and limitations of verbal communication, proving that music is a universal language that truly connects all of humanity. Each title has been carefully chosen due in part to the underlying message the lyrics transcend.

The rhythm throughout the compilation is a steady 124 beats per minute. Its purpose is to inspire dance, another therapeutic healing practice known to release stress and promote good health.

The most important message the compilation conveys can be summed up very simply.

“One of the ways we will give birth to a new world is by speaking it into existence. Love is not a weak word. One Word, One Prayer, One Book, One Speech, One Conversation, One Poem, One Painting, One Script, ONE SONG… at a time. We will speak of Love, and our word will prevail!” ~ Marianne Williamson

Torq 2.0 by Avid (the same software developer as ProTools) was used to produce the mixed set. Below is a short video showing Torq in action.